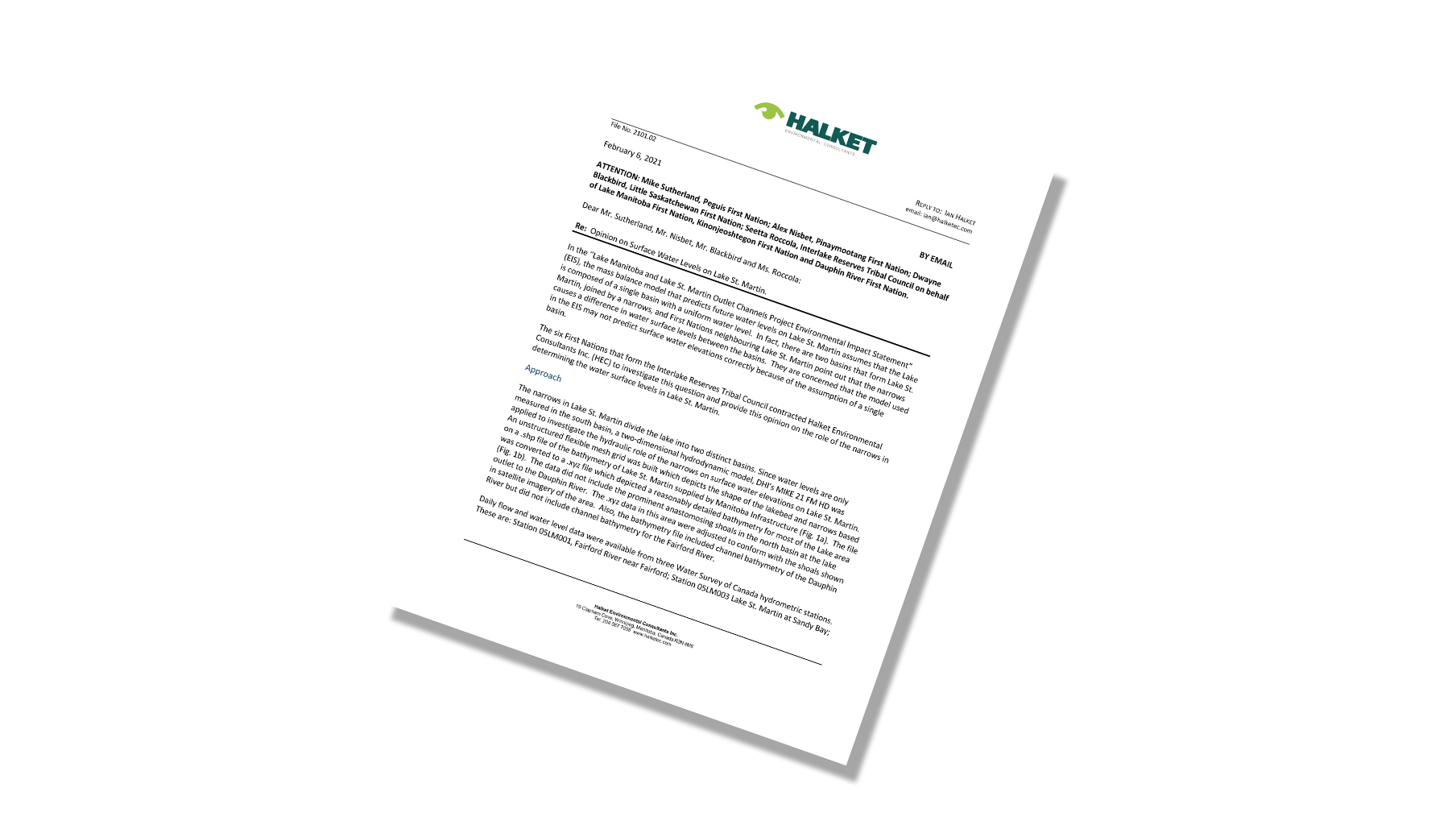 A new independent report (the Report) commissioned by the IRTC, as well as Lake Manitoba, Kinonjeoshtegon, Dauphin River, Little Saskatchewan, Pinaymootang, and Peguis First Nations (Interlake First Nations), corroborates Indigenous Knowledge that has long indicated that “The Narrows”, a narrow, shallow natural channel that divides the south and north basins of Lake St. Martin, acts as a bottleneck that greatly impairs one of the primary objectives of the Channels Project, i.e., to prevent flood impacts on First Nations situated on the south basin of Lake St. Martin.

First Nations have been asking Manitoba to do this study for years, and the Province always refused, treating our Indigenous Knowledge as folklore. Now we know why: The Report commissioned by the Interlake First Nations raises serious doubts about the benefits of the Channels Project.

Chief Garnet Woodhouse of Pinaymootang First Nation says “We have always said that we want to be partners in this Project. But the model used by Manitoba to predict flood levels in Lake St. Martin wrongly assumes that the Lake is composed of a single basin. One of our main concerns is this assumption. First Nations have been pointing this out since the start of the Project planning. There are two basins to Lake St. Martin and “The Narrows”, by holding back water in the south basin, causes a difference in their water levels. That is why we commissioned our own study – and it shows that the flood protection predicted by Manitoba for the project is greatly overestimated.”

The key finding of the Report by Halket Environmental Consultants is that, “the narrows act as a hydraulic control and the effect of this control causes a significant difference between the basins’ water levels.” The model used in the report further suggests that, “the flood protection offered by the Project has been significantly overestimated.”

Manitoba has dismissed First Nation concerns that the Project will cause significant harm to the environment and to our communities. The Premier has claimed these devastating impacts will be offset by the flood protection offered by the Project. According to Chief Woodhouse: “We now have the science that confirms our serious concerns from day one: that the project, as designed, will not protect our communities from flooding.”

Chief Cornell McLean, of Lake Manitoba First Nation and Chair of the IRTC adds, “When the concept of building a new channel between Lake Manitoba and Lake St. Martin was first proposed a key recommendation of the 2013 report from the Lake Manitoba-Lake St. Martin Regulation Review Committee, Finding the Right Balance, was that the approval of First Nations on Lake St. Martin – those most severely impacted by the Province’s flood management systems in 2011 and 2014 – must be a prerequisite of any decision on the Channels Project. We uphold that view and reiterate to both Manitoba and Canada that the consent of First Nations of the Interlake is fundamental to finding a solution to flood management that reflects the honour of the Crown and advances reconciliation.”